I don’t know how it sounded or what the writing says, but it is gorgeous.

Discovery News has an article on the Ancient Scottish language. 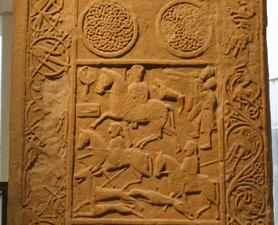 The highly stylized rock engravings, found on what are known as the Pictish Stones, had once been thought to be rock art or tied to heraldry. The new study, published in the Proceedings of the Royal Society A, instead concludes that the engravings represent the long lost language of the Picts, a confederation of Celtic tribes that lived in modern-day eastern and northern Scotland.