This week I had lunch with Linda, Darlene, and Dad.

I ate with the boys two or three times alone and twice with R.

I’ve read about 100 blog posts, written 20 or so, and added one blog to my blogroll.

I tried to change my theme on another blog and ended up with the original because all the different ones broke posts or just looked bad.

I’ve sat on the couch so long my bum hurts.

I finally read Citizen 13660 so I have now read at least three graphic novels.

I have not yet done my Defensive Driving. I need to get that done soon. Very soon.

I worked on the project for Charles C at school for… oh, about twelve hours. I think I have some good stuff and I can get it finished. He won’t like/use it anyway, so I guess it doesn’t really matter.

Got someone to come tomorrow to do the mowing, edging.

I spread ant killer around. A whole bag. Don’t think it did any good. I’ll spread another bag and then go for a new type.

I wrote about sixty emails to random people I don’t know about the conference presentation in October, trying to drum up sufficient interest to get a second session going. I just think it’s a good idea and I am going to try to do it. Had to accept later proposals, but I think it will be good. (Or it could be good anyway.)

Wrote a proposal for MLA. I would really like that to get accepted, but thinking back on it I am not sure that it is sufficiently cutting edge for them. The topic was very … shocking. Deb at AC said, “Really?” I had to tell her that she’s at the front of the wave, so of course it looks passe. However, the rest of the ocean is doing squat. It’s what they were talking about in 2009 about vidcasts at SXSW. You think because everyone you know is doing it, that everyone is doing it. But, in fact, very few people are doing it. It just isn’t getting done.

Anyway, I hope it is accepted.

Haven’t written one for 4Cs, but I want to. Still scratching my head on that one. What to do? Have collaborators, but no topic. That’s usually my job. Think it up. Oh well. Maybe call one of them and talk about it and I will come up with ideas.

Freaked myself out looking for jobs in other places. Found some that looked interesting. Not applying. I like where I am. I like my job. I applied to one place because I was already in the process when I got the call. And I don’t know if I want them to call me back or not.

Prophet (some guy I don’t know) told the C’s of Austin that they wouldn’t have a funeral. M said, “Whoa. You know it’s going to be bad.” If the world is going down the toilet, then maybe the other school would be a better place to be. Less water, though. Harder to grow food. (Hope prophet’s wrong. Or that it means Jesus is coming back soon.)

What else? Did laundry. Cleaned house some. Read twelve or so novels. Haven’t read in a while. This has been a real time of blessing in terms of relaxation and rejuvenation. Thank you, God, for that.

My article came out in the journal. I was happy that it did. Wonder if I should toot my horn or take my colleague’s approach and only announce stuff that is HUGE.

There’s a dog somewhere barking. It’s late. I hope the dog goes home and calms down soon. People (though not me) are trying to sleep.

Oh, I changed this blog’s theme, too. I was just getting frustrated with the other, though I liked it originally. So I went to this. There are others I might use, too. This blog is less complicated.

Had a kerfuffle over my other blog. Thankfully ChrisW from AC was able to straighten that out. Can’t believe Susan said she was “shocked” and that I was “unprofessional.” No. But it does show that not everyone knows the new media.

What else? Watched an interesting TED Talk by Brede Brown from UofH. Gonna have to start watching more TED Talks. Maybe I can incorporate some into my classes.

Read some books for fun. Eight romance novels. Six science fiction novels. Not as many as I thought, but, hey, reading for fun is good.

I dyed my hair. It looks horrible. I’m going to have to start going to a pro more often. Don’t really want to do it once a month, though it needs it that often. Or maybe I should just go with a darker color. That would work too.

I’ve been very blessed. Thank you, God, for spring break.

Help me to know that you are in charge of the universe and you know the steps I need to be taking. Help me to follow your guidance and walk the way I should be going. Amen. 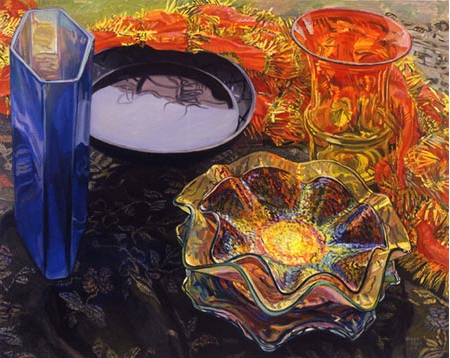 found at lines and colors

I know I like it because of the blue glass and the carnival glass pieces, but this is so gorgeous.

Her website has a couple of beautiful depression glass pieces on the home page.

I am going to have to get something of hers, if I can a) find it and b) afford it.

I went to her website, but at least in Safari it doesn’t let me see prices of paintings or prints.

When you think of moving from a large thriving city to a small town in West Texas, you expect that the real estate will be less expensive. Moving from where everyone wants to go to out in the middle of nothing ought to make houses cheaper. I have found, to my dismay, that it does not.

In the entire town to which we are thinking of moving, there is not a house the size of mine for anywhere near the cost of mine. I find that very scary.

I thought that moving there would be financially a wash, but I didn’t realize we would take a hit. I have trouble with that.