I ate popcorn tonight because I was so tired of all the food I’ve been eating, low carb. That was probably not my best choice, although it tasted good.

Then I read a very sad book. I didn’t think it was the sad one, but it was.

And now I’m sitting on the chaise lounge depressed.

I told the owner of a flooring store that we hoped this would be our last house. He laughed and said it wouldn’t be. Said someone knocked on the door of their home, after 17.5 years in it, and offered to buy it. The kids were grown so they sold. Then they fixed up another one and sold it. Then they were living in a house and fixing it up and someone else knocked on the door and asked to buy it. So they’ve lived in five houses in the last ten years or so. He said not to ever plan on it being your last house.

But, regardless of whether or not it is our last house, I want to fix it how I like it while it’s new so that I can enjoy the time in it.

The white paint in the den makes the whole room look a LOT better. It’s quite bright back there now, though some of that is because I took the curtains down. I’m going to have to get tie backs and something to hang them on so that I can keep that brightness when the room darkening curtains get put up in there for the television, probably before the television.

I like the table that I bought, and I bought the smaller of the two we liked, but I still think it is too big. Can’t imagine how big the other would have been. It’s half a foot longer and half a foot wider. I am not sure it really works in the kitchen as an island. I may have to get rid of the folding chairs and the card table (or move them anyway) and put it under the chandelier instead. I’m not sure. There is room, but it seems so big!

I’ll be glad when the den and the kitchen wall are finished so I can put everything back. I don’t like having the house messy. I know I’m not the world’s greatest house cleaner, but clutter bothers me.

The pantry is supposed to be done by Wednesday. We’ll see if it really is. They were not too thrilled that I wouldn’t let them bring it out unfinished, but I’ve waited over three weeks since it should have been done. They can wait two days. They told me it would be done by the 1st of August, but they hadn’t even started on it. I gave them 50% of the money for the cabinet about two months ago. They didn’t even start on it until I called on the 5th. I will not be recommending them to anyone.

R is not too thrilled about moving here. But we both agreed we were coming, so I’m going to get over feeling guilty. It’s where we decided to come. It’s not my fault he’s found other things he’d rather do. I asked him, before I committed to this, if he wanted to stay in Houston. But he said we were going.

Of course, that’s easier to say when you don’t have to do anything about it. I packed us up. I got everything here moved. He’s been very stressed about the work on the house there, but the move and this house has been a lot more difficult. Oh well. I guess that’s both of us thinking we have the bigger job again.

I haven’t been walking enough. I take the dog out in the morning, but only for about half an hour. That’s all I can manage without food and I have to wait to eat because of my medicine. I’m thinking about going out tonight, but it’s late and it is dark. Yes, I go out in the dark in the morning, but there are lots of people driving by going to work. This late at night the street is pretty quiet actually.

I got the office closer to done, though it’s still not there. I filled up the two filing cabinets I have and still have two or three boxes of filing to unpack. Hopefully I can figure out what to do with those things.

I was going to fix the desk up, but it is filthy and desperately needs cleaning. I thought I would bring the dust buster, but that is in Houston still. So I guess I’ll bring a roll of paper towels and some cleaning supplies and just clean up all the crap by hand. 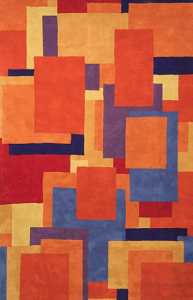 I’ve been looking for rugs for the house and the office. I found two I really like, but I’m not sure they would be great for the house. This is my favorite.

I thought about framing R’s pictures in the tube for the house, even though I had intended them for my office. But we need some bright art for the den and I thought that might be a good choice. However, I also want him to know that I am proud of his work, so I think I will hang it at the office. I think I’ll put the other Tarkay in the den. There’s no orange in it though and I really want some orange in that room.

I miss my little orange painting from Austin that was stolen by someone after Hurricane Ike at the college. I’m guessing it was someone cleaning the offices who took it, but I wish I had it still.

I’m hanging the Benfields R bought me on the kitchen wall. The Trebys are in the guest suite (guest room and my study). The Tarkay is in the living room. It actually matches the gold wall, strange as it is to admit that.

We are looking for flooring, preferably wood. R has found a guy he likes to do the wood in Houston, but I don’t really want him to come here and do the wood. I’d rather hire someone here. The prices range from about $7/sq ft to $25/sq ft. The guy in Houston is about $11.50. But I think we could get a nice floor for $8/sq ft. However, the nicest floors would require us to hope that the installers recommended were good. I have not had a lot of luck in the folks who have been recommended so far.

I’m really sorry we didn’t go with the $3400 pantry, which would have finished out the cabinets in the kitchen and underneath the desk area. Even though we are getting a pantry, those other areas are still in need of fixing. I really don’t want to call the guy back and ask how much he would charge to do that half of the stuff when we went with someone else for the pantry. But I might do it anyway.

The house is so messy, but there’s not really any point in cleaning it until all the painting is done and then I can clean everything at once, rather than having to do it twice.

Even though the kitchen wall had Kilz and a coat of paint, it needed a second coat. I put a second coat on the bigger half and painted the baseboards, but I didn’t do the smaller half because I didn’t have anything to cover the floor.

I know Brian didn’t think I wanted him to do the window casings in the den, but I painted them when he left, so they will get done. I liked them, but not enough to have them stand out like that. I think having all that wood painted white makes the room look better. (Yes, I painted wood. Let’s all faint.)

I’m lonely here. I didn’t expect to be since I know so many people, but really I’m missing R, and M. E is a joy to have here, even though he stays in my study playing his games most of the time. He did come out multiple times and help me put the table and chairs together. He also helped me carry in the table and put it up once I got it together.

The dog goes in her crate on her own, now that she has a nice comfy pillow in there. I need to put a pillow case on it so I can wash it easily. I’m fairly sure I have very soft ones that she will enjoy.

I’m wearing my mother’s wedding ring and I probably should stop that, but I don’t want to put it up. How weird is that? Probably very. It’s especially bad because the ring doesn’t belong to me but to M. If I lose it I will feel bad. If it is stolen, though, that will not be my fault, so I won’t feel as guilty. So I should definitely put it up.

Since I had popcorn, about two hours ago, I don’t want to go to bed. I want to get all the starch through my system so that I will sleep well.

Yesterday I went to bed at five pm and stayed in bed (except for maybe an hour) until 6 am this morning when the dog woke me up. I guess I was very tired.

I found a bedspread I liked, but it is a little Asian. I don’t have anything else that is so I am not too sure about that. I think it is pretty though.

The other rug I like has a lot of olive in it, which is not a color I really like, but it has both my blues and a red in it. That seems like it would be a good match for our stuff.

I’m still trying to figure out what to put on the new island table. I’m thinking a blue vase and red and orange flowers. But I haven’t found anywhere around here with cheap flowers yet. HEBs are very expensive and not particularly pretty or long lasting. Gonna have to keep looking I guess.

I could go to Walmart and buy the black out curtains, but I guess I keep hoping I’ll find beautiful blackout curtains in orange. I did find some, by the way. On overstock.com. Which is where I found the rugs. But not the bedspread set.