Walked a mile to a shoe repair place to get Ron’s shoes shined.

Ate at a diner named Dizzy’s where the waiters wear “obey the bacon” t-shirts and the granola comes in gargantuan. They serve grits. 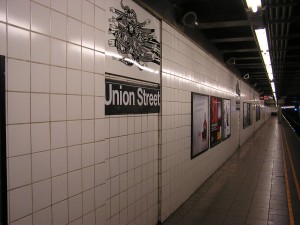 Got on the R train to head to Manhattan. The entire car was serenaded by a barbershop quartet singing about not being able to sleep and Jesus taking care of it after a while.

We missed our exchange. Got off at 14th and Union Square. Figured out a new subway route. Definitely explored the underground.

Unlimited pass for the subway is not actually unlimited. It can only be used ever half hour at the same station, so if you thought you made a mistake and leave, if you had not made a mistake before, that was a mistake. You will have to wait half an hour or walk to the next subway stop.

Walked over a mile to Forbidden Planet, the comic book store, after we found that the comic illustrators’ museum was closed. Ron shopped at Forbidden Planet, while I went next door to The Strand, a new and used bookstore with 81 miles of books (or more). I purchased eight postcards for the August poem a day co-op. All but one were of New York.

On the way we went into a costume store that went through the whole block and had a second floor, downstairs. Ron bought a hat. It’s an engineer hat.

Ron had a hot dog from a stand. Then we each had a slice of pizza and split a Caesar salad at Famous Faglimia. Pizza shop and diner, done! Still looking for Italian ices. It appears that yogurt shops ahve taken over from gelato. 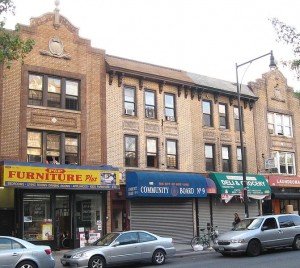 Walked 8 blocks looking for yogurt shops with variety. Apparently we were walking away from the yogurt. Eventually we got off Broadway and got on Mercer. We stopped at a gourmet coffee shop (which has its own high end coffee magazine) and had dessert. I had what they called macaroons–the 8 sampler. Really they were more like fluffy cookies with stuffing between two. They were green, pink, brown, caramel colored. The raspberry was good. The hazelnut not so much.

Then we headed back to Brooklyn. Misread the train map and had to walk to the next stop. Got back to the hotel, took showers, and napped.