Sleep No More started at 11, so we caught a cab at 10:30and headed over. Not an actual taxi, but a car service. Plus, it had air conditioning (unlike the taxis). Minus, he talked on the phone and wrote stuff down while driving. 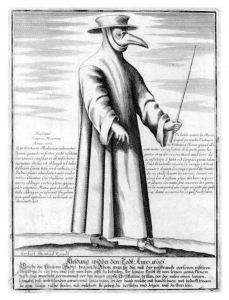 Similar to the masks we wore.

Got to SNM. We were about 8th in line. They let us in, gave us our plague masks, took all bags (for a $3 fee), gave us a punched playing card, and sent us to the bar. We had iced water and sat and talked.

Turns out they gave us different numbered cards on purpose. So they called my number separate from Ron’s. I went without him, even though I had flatly said he had to stay with me.

The elevator was crowded. A woman had not read the “don’t be the first one off the elevator” advice. They opened the elevator, she got off, and they closed it again. She was really on her own.

I was let off at a dirk track with crosses everywhere. It reminded me of abortion protests, so it was not particularly scary.

As soon as I could, I went up the stairs to the highest level they would let us go. There was a big guy–think bouncer– in black with his arms crossed blocking the way to a higher level.

From there I started down.

The first room I came to was a library. I opened a book off the shelf. It was Hayakama’s Language in Action, a foundational linguistics text. I so wanted to take it with me!

One of the children’s rooms had a one-way mirror set up to make you see yourself, but as a ghostly image–like a photo shot with a long exposure while you were moving.

Eventually I arrived at a doctor’s waiting room. I sat down and read the early 19th century advertising broadsheet. I recognized some of the quack machines from eBay and read some interesting ingredient lists for medicines.

I saw the insane ward, including the doctor’s notes on Lady Macbeth’s condition. (I was looking for those because I had read about them in the reviews.) There were rocks on the first bed, covered up with the thin sheets and blanket, while the rest were empty.

The next room was the wash room, obviously a modern view of an insane ward’s bath (and wrong). It had about eight claw foot tubs. (An actual Bedlam would have had chairs to tie the patients to while the “caregivers” poured water over their heads.) There was a nurse standing over one of the tubs. At first I thought she might be drowning a mannequin, but she was washing a patient’s pajama top. It looked like a Civil War uniform shirt to me, though very think. Creepy, too, because she washed it in slow motion with a lot of stops.

Later on, having made the circuit on that floor, I saw Lady Macbeth undressed by the nurse and she climbed into one of the tubs. So I saw the nude scene, but it was very un-sexual.

I saw the sweet shop, Hecate’s workshop, and the taxidermy room.

I did not see the detective’s room, which I had really wanted to see. It had a dark room next to it with images of birds being developed (for the entrail omens equivalent).

I was in a small living room, sitting at the secretary and reading a letter one sister wrote to another, next to a packet of mail sent by that sister to the other at the address of the living room but marked Return to Sender. The letter said she had been let in by the owner of the sweet shop and that the sister’s tea was still warm, but that the sister was not there.

While I was there another woman came in and sat down at the table in the middle, looked at a book, then moved.

While we were both still in there, an actress came in and slammed the door behind her. The other participants who had been following her tried to open the door and knocked but no one opened it. She sat at the center table, opened her purse, took out a wad of fake money, counted through it, stuffed it back in her purse, and moved to the fainting couch next to the window. She sat there and stared out at the participants who were crowded around it.

At some point I got up and wandered into the next room (the living room was connected to a bedroom) and found that her thin cotton nighties were hanging on the wall (antiques or at least vintage) and a Bible was open to the story of Absalom’s death with blood on the edges of the page.

While I was in there the living room door got opened and the actress came into the room, went to the armoire, got out a suitcase, filled it with dresses (but not underthings at all), and then turned and left–with all the participants following her.

I was sure the letters and sisters were part of a film noir plot, but I have already forgotten the women’s names.

I was also in the front lobby of the “hotel” enjoying the cool of the fan blowing at the copper-covered lobby counter when another actor came in. He stood behind the desk and messed with the papers. One participant came up to him (none had been following) and handed him one of the sheets of paper off the counter. He took it. Then the actor reached into his pocket and slowly pulled out a balled-up sheet of paper. This he handed to the participant, by reaching for the guy’s hand, stretching it out, and dropping the ball into it. Then he curled the guy’s fingers around it and the guy left.

Soon a female actor came in and went to the front desk (perhaps the one I had seen packing?). She started to register and then she and the actor behind the counter began to dance and fight. He climbed on the furniture; she pushed him off. He ran away; she did not follow. He only ran around the corner (visible to me but not her) and stepped into one of the four phone booths. The phone on the counter rang, she answered it, listened, and then slammed the phone down. She grabbed her suitcase and went to the phone booths, opening each. I think they fought danced again. But I stayed where I was and did not follow them.

It was a hot June in New York and there is no air conditioning, so I had quickly taken off my jacket. I also pulled my hair up using the tie for the plague mask.

At one point I wandered back by the “ballroom.” (This also several scenes that are acted out. I think I saw three there.) This time I saw Ron. I pitched my playing card down at him, trying to catch his attention, because we were not allowed to talk. I missed and he didn’t notice. But then he came upstairs. So I went to stand by him. He didn’t pay attention to me, so I pulled up my mask a bit and nodded to him. I don’t know what he thought, but he did not realize it was me and he wandered off. I wondered for a minute if I had been wrong, but that Las Vegas shirt he was wearing (the dark red long sleeved with black embroidery) is pretty unusual. I know it was him.

There was a room with lots of clocks ticking and a female actor came through and stopped them all and put cloths over them, like mourning.

At one point a bedroom had a metronome and a participant came in and stopped the metronome. When he left, I started it up again.

I moved back into the lobby of the hotel and read on two different books. One was very boring, but one was a book with 1066 in the title. I thought it might be history, but it turned out to be a comic play. It was rather interesting, but I decided I should not just stay there all night reading it.

Eventually I got lost trying to find my way back to the bar and asked one of the black-dressed bouncers. He hushed me for using a normal speaking tone and gave me directions. They got me part of the way there, but not the whole way. So I asked someone else.

I was out at the bar at 1:30. About 10 minutes later Ron came out. He thought I had been out there the whole time, but I hadn’t.

The bar had a “lounge” area where a band and a 1920s style singer were playing. If we were dancers, that would have been fun, but we weren’t. We sat there a few more minutes, had another glass of water, and then we left.

It was odd, a bit scary but not a lot, and just overall a strange–but unique–experience.

When we left, we had the bouncer guy take our pictures. If I knew how to put that up, I would. Maybe I can get Ron to show me.