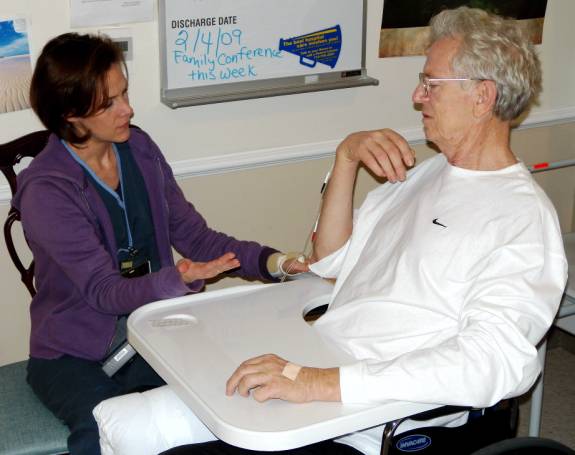 My uncle took pics. This is the therapist getting Dad to move his arm. He has electrodes on the arm to help stimulate the muscles. They do that two times a day.

Yesterday he moved his thumb.

Three days ago he went to the bathroom on the commode.

Yesterday he used the walker to get to the elevator, a whole 20 ft.

The doctors are keeping him in the hospital until Feb. 16. Yeah!

Which is where I have been the last three days pretty much all day long.

I’m glad I am able to spend time with Dad, but I am also zonked from all this.

I need to wash my hair and all I want to do is read.

Dad got in and out of a car today on his own for physical therapy.

He told my sister she needed to go get R, my niece. He was right. It was time to go get her.

He put on his own shoes and socks and put on and took off his shirt.

He and I had a long conversation about my cousins, his eldest brother’s kids.

He recognized people from church and spoke to them.

He got bored and asked me to take him to the cafeteria for ice cream. He ate strawberry ice cream all the way back to the room.

He wanted to go to the cafeteria to get mother’s dinner. We did that.

He turned on the television at the right time and surfed the channels to find Wheel of Fortune.

He finished the low-level cognition book the speech therapist has been using with him.

I am not getting done everything I want to get done or need to do or think I need to do, so I have been feeling like I am being unproductive.

But really I am getting done a lot.

Today I:
went to the courthouse to get my new license tags
got the oil changed in M’s car
ordered a new dipstick for M’s car
filled out half the toll tag letter
taught two classes
wrote a quiz
graded a quiz
applied for a paper on my old dissertation (not the one I actually wrote)
bought my plane ticket to Albuquerque
reserved my hotel in Albuquerque
had lunch with a friend
had dinner with my husband

Tomorrow the safe and quiet change of government will happen again. We will have a new president.

And the new president will be half-black. Everyone who talks about him says he is black. And he is. But he is also white.

But I think that Dr. King, Jr would see much in his election and presidency to the good. The fact that his dual-race identity is not hidden. The fact that he is going to be president. The fact that lots of people aren’t out there protesting.

Today is a day in honor of Dr. King, Jr’s dream. Tomorrow is too.

My Monday night class did not make.

Usually I would be sad about that, but they also offered me a Wednesday night class to take instead.

However, since my father is in the hospital and I am up there so much, I decided that I needed to have more free time rather than less, so I did not take the Wednesday night class.

I am applying for a full-time position to the same school that I applied and got one interview last year. I would enjoy teaching there and the school is definitely growing.

Hope I do well enough to get two interviews there. I need to work on my cover letter right now.

Whoo hoo! Hope he comes back all the way.

Change… That’s what Barack Obama promised. And that’s what I got.

Once he was elected I could no longer stand to listen to talk radio. It was just too painful.

For two months, my radio was silent.

That’s change I believe in.

Then yesterday, I turned it on again. And it’s not all-anti-Barack all the time. So I’m back listening to talk radio. Which saddens my youngest.

It’s obvious from the fact that I mention movies like “MASH” and “The Princess Bride” which my students have never seen.

One of my favorite actors was Ricardo Montalban, of whom I read today on Happy Catholic. He was married for 63 years to his wife, until her death in 2007. And he was a practicing Catholic.

I knew I liked him.

He died on Wednesday.

Yesterday he couldn’t come up with a single fruit. I tried to get him to tell the speech therapist banana.

We also had a long and involved discussion on what papers I’ve had accepted and which have been sent out. He asked about GT and FoF. He also asked about a review I was supposed to have published. That’s up. I tried to show him my picture on the net, but I couldn’t get it to come up.

Microbiologybytes on infection control in hospitals.

New York Times has an article on ICU (since my dad just got out, I noticed) and how they are problematic, since they sedate their patients and don’t get them up.

My dad has aphasia (can’t say what he wants), para-aphasia (says a different word, perhaps similar), neo-logism (makes up words), and perservating (says the same word for lots of different things).

He said airplane for helicopter
moon for broom

It was not a pleasant experience to watch him mis-identify or be unable to identify so many things.

My dad had two strokes at the same time (or close enough). One effected his balance, the other his right side motor skills. The doctors have been saying (up until yesterday) that he would recover at least 90% function and could reasonably expected to get all the way back.

Yesterday they said his confusion over our names, the year, where he is (even though we have told him all of those things), 9 days after the stroke makes it unlikely that he will ever be well again. The one dr said that he will always (at least) have short term memory loss, where he can’t remember things for days or weeks after they happened.

Please pray that the dr is wrong. Pray that God will heal him and let him recover at least well enough that he can go home again and not spend the rest of his life in institutions of one sort or another.

Pray for my family. Right now we are spending 24 hours a day with him. The drs said that this would be better for him right now. Today is our 11th day of that. Tomorrow college starts and I’m on shift from 11 am Monday (after I get off from school) till noon on Tuesday (when I have to go back to school).

Please pass this prayer request on to anyone else who either knows me or would pray.

But when you’re only halfway up, you’re neither up nor down.

– Couples may be able to enhance one another’s health by being more physically affectionate with one another, new research in Psychosomatic Medicine shows.

Couples who underwent training in “warm touch enhancement” and practiced the technique at home had higher levels of oxytocin, also known as the “love hormone” and the “cuddle chemical,” while their levels of alpha amylase, a stress indicator, were reduced, Dr. Julianne Holt-Lunstad of Brigham Young University in Salt Lake City, Utah, and her colleagues found.

Emotional and social support is key to both mental and physical health, Holt-Lunstad and her team note, while support between spouses may be particularly vital. One important but little-studied way that people express this support, they add, is through “non-sexual, caring physical touch, such as hand-holding, hugs, and sitting or lying ‘cuddled up.'”

according to Reuter’s Health.

These things would be good. My husband will be home in three and a half hours.

I am looking forward to it.

Today it is 2007 and Reagan is president.

However he knows all his kids’ names and my sons’ names as well.

He laughed at the baby and chased her with his hand when she came to visit.

He did all his therapy in rehab (his first day there) and was exhausted, sleeping even in the wheelchair.

Thi s is atrocious. I will blog about the travesty later. Or maybe not. But I will include it in my Silence paper.

Want to see this later. Rufus the slingshot man.

Accountability weak for high school transition to college. If we hold colleges accountable for numbers graduated, which people want to do, then surely we can hold high schools accountable for how well students do in college. After all, personal responsibility is a dead virtue.

Depression may influence transmission of poverty:

Children from poor families are more likely than their peers to be depressed as teenagers, with effects that can ultimately make it harder to climb out from poverty, a new study suggests.

The study, which followed nearly 500 Iowa families for a decade, found that children in poorer families were at greater risk of depression symptoms by adolescence. These teenagers, in turn, were more likely to “grow up” faster — including having sex, leaving home or getting married at an earlier-than-average age.

This cycle, the study found, eventually put kids at risk of substantial obstacles in young adulthood, such as low education levels, unemployment and a lack of stable relationships in their lives.

“The main finding shows the continuity of family adversity over generations — from family-of-origin to a young adult’s family,” lead researcher K.A.S. Wickrama, a professor of human development and family studies at Iowa State University in Ames, said in a written statement.

“In other words,” he said, “it’s the transmission of poverty.”

The findings, which appear in the Journal of Health and Social Behavior, suggest that early-life stress and depression symptoms feed each other, ultimately making the transition to adulthood a tough one, according to Wickrama’s team.

No, it’s not. And in 1968 I know for a fact we were not in New Jersey. In 1968 we lived in the exact same town we live in now. Houston. (Hey, 40 years ago I lived here. I live here now. You’d never know I lived in about thirty places between the two, would you?… Unless you’ve been reading my blog for a long time.)

The doctor asked my dad what year it was. She asked him where we were. She asked him where in New Jersey we lived. (Is there an Alexandra? We didn’t live there, for sure.) She asked him who my sister was. He thought she was Kristy (her best friend) or Glenda (his secretary about thirty years ago. Or at least those are the names he said. When I gave him three names, he picked hers correctly.

He also said my nephew and two nieces are A (correct), Tom (my niece?), and Katie (what he used to call his baby sister).

He did know my name and had asked to see “my boys.”