Three different hunting trips:
R and I looked at five houses when we were here together. Two were very nice; three wouldn’t work for us.

One of the nice sold the next week. The other one was taken off the market last week.

I came back to town three weeks later and saw 20 houses in one day. I found four I really liked, though I did not think R would like one of them, for a total of five possibles.

I came back this week (two weeks later) to view what is still or now available, so that on Saturday R and I can re-view the top four or five and make a decision on whether we are going to make an offer (my original plan), keep looking (what R suggested recently), or if I am going to rent instead (R’s original plan).

What changed?
First
1. Well, I found out that it is overpriced for the neighborhood. I thought it was right at the junction of nicer houses and smaller houses, but, in fact, it’s still in the smaller houses area–though it is a nicer and bigger house. However, because of the area that it is in, if I pay anywhere near the asking price (which my realtor says is standard since this area has not experienced the big housing bubble), I will be paying about 12% more than anything else in a four block radius.

If they will come down 17%, the house is reasonably priced (exceptionally for its size), and I can afford to do all the painting, un-papering, and carpeting that needs to get done.

The problem with making a lower bid is that the owners purchased the house three years ago from someone who had purchased the house four years ago. The present owners paid 17% more in 2008 than the previous owners paid in 2007. It wasn’t worth that much. What I am suggesting paying is what the 2007 owners purchased the home for. In the rest of the country, that was just past the housing bubble height, and certainly the 2008 price seems like a housing bubble high, but it may just be that the owners were desperate for a home large enough for their five kiddos!

Second
2. When I went back the second time, what I adored the first time seemed less nice. I think this is because I have seen even better woodwork (which is what I like the most about any house at any time) in other houses. But not in any houses that would work for me. So now I have a higher standard for gorgeous, though the wood is still high quality solid hardwood and has not been painted.

a tangential rant
Only stupid people paint high grade hardwoods, imho. (The only exception is if the wood has been damaged by a flood or something.) I have seen that painting solid wood trim a nice crisp white can make a room look better, but I still would not do it. Not.

The next reason why the favorite wasn’t so perfect:
Third
3. My favorite house is really too big. It is. I know that. I knew it when it went at the top of my list. BUT I hadn’t seen any other houses that could do what we wanted to do with the house. I have now. This house could be as much as a 1000 sq ft bigger than it needs to be to do what we want/need/prefer.

So why not buy the smaller house that works?
Two reasons.
1. It is even more $$$ than this house. (For 1000 less sqft!)
2. It is butt ugly baby-diarrhea brown in a cookie-cutter neighborhood.
(closest to the brown in the middle of the final row) 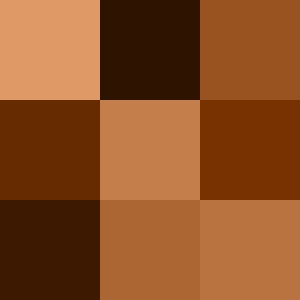 Other options?
My dad and I saw a smaller house that we actually really liked (we think it was the price and the neighborhood) but it stinks and it has foundation issues. While those might be fixable, they might not be too. Not good if they aren’t and R and I buy the house. Plus, though I liked it, it doesn’t really have the right set of spaces that R and I want.

A house which I would previously have thought was too small (before I realized I used to think my 1500 sqft house was large and before the 1830 sqft house that would work) is available in a very classy neighborhood. It backs (across the second lot which is part of the sale) to a small highway, but not a high-traffic highway. For anyone reading this in a major metropolitan area, this small highway has about as much traffic as a side street in a neighborhood. It is the cheapest house in the neighborhood (much better than being the most expensive). From the pictures I would say that while the outside is very nice, the inside was not made as well. However, that can be fixed over time, with money. Which I hope to have some of. Eventually.

I also called the realtor’s assistant (who has been working with us today) and asked to see another house which our realtor steered us away from (maybe it stinks like the one we kind of liked? or maybe it is just inexpensive) and to see my third favorite house again.

The steered-away-from house is so I can truthfully say I’ve seen everything.

The third favorite house is to see if it has gone up or down in preference based on having seen so many other well-made or nice-seeming or something houses. Update: When arranging to see this house, we found out a contract was accepted on it today.

Since we’re waiting on the small house in nice neighborhood time to call for an appt (even knowing that we might not get to see it because I leave tomorrow and they like 24 hours notice), the realtor’s asst hasn’t called the other two houses for an appt either.

So we won’t know anything for at least half an hour past the time I am typing this sentence.

I still want to show R the five best.

What’s good about this house?
It is very close to my new job.
It is very close to a good friend.
It is a patio home, so not a lot of yard work to do.
It has curb appeal, which I know realtors say is very important, but which I had not realized mattered to me as much as it does. It matters. It does. I don’t want a house with a garage in front. (Though when the best house I could afford was built that way, I went with it anyway.)
It has a two-car garage and is on an alley. (Alleys are good things here. It means private access and your trash isn’t in front of your house.)
It has sky lights in the kitchen and breakfast room.
It is not “weird” in layout.
It has a good layout for entertaining into the outside, where there is a patio space (though not covered) for a table and chairs.
The backyard is, I think, the best thing about this house.

What’s not good about this house?
Someone painted what I think was probably really beautiful hardwood (based on my friend’s house in the same subdivision section) a cutesy blush pink. (That is, white with a few drops of red in it.) UGH.
Bad: painted wood.
Worse: pink painted wood.
It needs de-wallpapering, paint, and carpet. (Okay, that’s true of my favorite too.)
It is small. 1755 but not particularly well laid out. Only three bedrooms. No room for my Civil War era, perfectly restored, family heirloom (at least since my mom bought it ten years ago) pool table.
Not particularly well laid out inside the house in general.
8-ft ceilings in all the rooms except kitchen/breakfast room. Yes, I’ve had that in all my houses. So what? I still want higher ceilings. (And, yes, my favorite house also has 8-ft ceilings, except in the den and master bedroom, which have cathedral ceilings. Those are enough to counteract the general 8-ft.)
It’s not particularly pretty. It may be that good paint, a new front door ($$$), and decent carpet would fix this. Maybe, if they would go low enough (which they should, though I don’t know if they will), I could put hardwood flooring into at least the living room and possibly another room or two as well. That would help me feel that it looks pretty. 🙂

What houses in the cookie-cutter to look at?
If I need five houses to give R a view of what is available and a reasonable choice for the home that will also be his for most of the rest of his life (we hope), then we are going to have to look in the cookie-cutter neighborhood this weekend.

There are many houses available in the cookie-cutter. (Which is worrisome all by itself.) They all have the garage as the front prominent feature. None are on an alley. All have high ceilings.
1. Butt ugly, great layout 1830 sqft, more $ than my favorite house. NO.
2. Same cost as my favorite, good kitchen with nice dark wood cabinets, pretty browns throughout (though still brown, you know). Maybe.
3. House with verses on walls, “library” that is supposed to be 9×9, but is a triangle so nothing reasonable except perhaps bookshelves with a chair in the middle will fit. Master will hold my huge four-poster bed. Pretty light wood kitchen cabinets.
4. Less expensive house with two living and two dining and open kitchen. Kitchen is just okay, but this is the only house where I might be able to have my pool table that I saw. Compared to the others it is not as nice inside, but, again, that can be remedied, while the space issue cannot.

So now what?
Third house is gone, as I was typing this I found out.
So I went through the listings. There’s a multi-family (which is not something I really wanted) that R had suggested seeing. She’s going to check on that and the last house I haven’t seen in the area around my work.

If these two houses (three with the inexpensive one in the classy neighborhood) are available to see, we will. If they’re available now to see, though, they still might be gone by this weekend. But you know what? I’m not buying a house that isn’t perfect that R hasn’t seen. If I find perfect, I’ll buy that. But otherwise, if it is supposed to work, it will.

Bummed.
I really wanted to have different options, so that R would have a variety to choose from, but it doesn’t look like that is going to be likely to happen if we buy this weekend.

So… Do I show him the two or possibly three that aren’t in cookie-cutter? Do I add cookie-cutters in because we’ve lived in those before and “we can do it again”?

You know, we don’t have to buy a house this weekend. Even though that was my plan.

So, I guess, I don’t really want to live in the cookie-cutter neighborhood and neither does R. As long as there is anything else that might possibly work, I don’t want to go there. So, I don’t want to show him those. However, even though neither of us want to live there, in quality the houses are very nice on the inside, with high ceilings, new (brown) paint, pretty kitchen cabinets (mostly). They are just $$$ for small houses.

Some of the houses are better in life than on the net. Some are the opposite. But at least he can get a feel for them. And I’ll tell him what I know or think about them. That may make a difference too. Or it might not.

But none are perfect, so we will both get a choice.