I went shopping on Wednesday for food and we have plenty. Ron actually went to Sam’s on Thursday, to make sure we didn’t need anything.

We have added some things to our list of provisions to get next time we will be housebound, though.

School was canceled for Friday. (Since I don’t teach on Fridays this semester, that didn’t impact me much.)

ACU says that the students were out playing ice hockey. 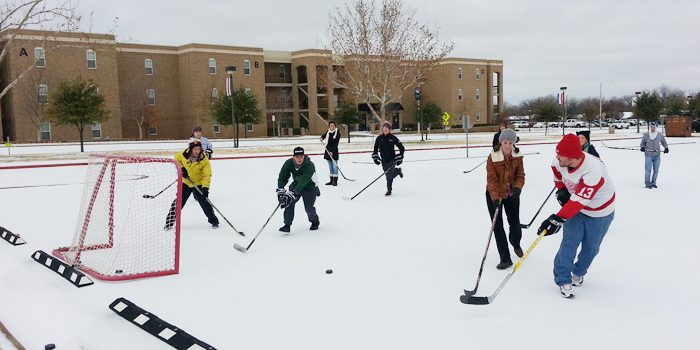 I have walked the dog twice and put her in the backyard for about 3 minutes 2x. The ice is crazy and the roads are covered. Of course our road has people driving on it all the time, so it is not as bad as the others. And 8th is actually clear as long as you are only on the block before ours to the next main road. Odd that the South/North roads are mostly ice but that East/West is clear. I mean Amarillo and Meander are sheets of iceâ€¦

I need to go walk the dog again.

We just went around the block again. Frozen ice is not fun to walk on and even the grass is frozen now, where there was sleet and snow yesterday.

It’s going to be 14 degrees in the morning when I normally go walk the dog. I am not going to go walk the dog at 5 am. There’s just no point of going out when it’s that cold and all we can do is go around the block. Hopefully later tomorrow it will get up to 46 (as expected) and the dog and I can do two or three miles. Since we have now missed TWO days this week, we should really go six, but I probably won’t. At least, not with the dog.