Live Science has an article that says:

n fact, finger-painting tots were quite prolific 13,000 years ago in the Cave of a Hundred Mammoths in France, according to Cambridge archaeologist Jess Cooney, who presented her findings last week at a conference on the archaeology of childhood at Cambridge University. The main art form was finger flutings, decorative lines made by people running their fingers along cave walls.

“So far, we haven’t found anywhere that adults fluted without children,” Cooney said in a statement. “Some of the children’s flutings are high up on the walls and on the ceilings, so they must have been held up to make them or have been sitting on someone’s shoulders.”

Steven Pinker is currently working on a book about the decline of violence through human history. We like to think that we are living in a very violent time, that the future looks dark. But the data says that violence has declined every millennium, every century, every decade. The reduction in cruelty is just astounding. So we should not focus too much on the violence that has marked the twentieth century.

from an interview with Stewart Brand

The only part of the interview I thought was actually interesting, although there are some tantalizing possibilities that are not realized.

An ancient Roman shipwreck nearly 2,000 years old may once have held an aquarium onboard capable of carrying live fish, archaeologists suggest.
…
Curiously, its hull possessed a unique feature â€” near its keel was a lead pipe at least 2.7 inches (7 cm) wide and 51 inches (1.3 meters) long. Why pierce its bottom with a hole that seawater could rise up?
…
“Historians think that before the invention of the freezer, the only possibility to trade fish was to salt or dry it, but now we know that it was possible to move it alive also for quite a long distance,” researcher Carlo Beltrame, an archaeologist at Ca’ Foscari University of Venice, told LiveScience.

A number of texts from antiquity have contentiously suggested the ancient Romans could transport live fish by sea. For instance, the scientist, Roman officer and historian Pliny the Elder spoke of transport of parrotfish from the Black Sea to the coast of Naples.

Review the survey of African art.
Hwk:
1. Go to the Art Institute of Chicago and peruse their African collection. There are more than 400 pieces. You do not have to look at all of them. Find one that you think is interesting. Then find a modern corollary to the piece. Link to both the African work and the modern corollary in the homework post on DavisEnglish.com.

I am teaching a humanities class this year and next and this story caught my attention.

How the Romans Made Pottery in Britain

“What we’ve learned from the suite of replication events on campus is that the firing technologies evolved to fit the materials,” Chatfield said.

The effort also helps trace the influence and intermingling of cultures, “such as European and indigenous encounters in Peru or the Romans entering Iron Age Britain,” she said.
…
While making the kiln was a lot more work and used a lot more fuel (wood, rather than the alpaca dung used in the Incan project), temperatures could be controlled more efficiently because the closed kiln was protected from the wind.
…

With this type of kiln, craft production could be organized more effectively and could also be supervised by one person â€“ the fire won’t rage out of control, endangering the community, and people don’t have to rush in to revive a flagging fire that jeopardizes an even baking. The Romans were efficient, if not artistic.

May also be relevant for Dielli.

The Star from American Digest begins with a quote from T. S. Eliot and then proceeds:

Theirs was the Age of Myth; a world where night was not dimmed by the web of lights that now obscures the stars. Their nights were lit by flaring torches, dim oil lamps, guttering candles; by the phases of the moon and the broad shimmering river of the Milky Way. As the sun declined and night ascended, life withdrew into shuttered and barred homes. Only the very rich or the very poor were abroad in the dark.

The night sky, now so thin and distant, so seldom really seen, was to them as thick and close as a handful of coal studded with diamonds. They could turn it in their mind’s eye even as it turned above them. They reclined on their hill sides, their roofs, or in rooms built for viewing and marking the moon and the stars. They watched it all revolve above them and sang the centuries down. They remembered.

It continues and gets better.

Fabled as a site of biblical battles and spectacular palaces, Tel Megiddo today is a dusty mound overlooking Israel’s Jezreel valley. It is also host to one of the hottest debates in archaeology â€” a controversy over the historical truth of the Bible’s account of the first united Kingdom of Israel.

Joanne Jacobs had the story:

Billy Joel’s song, illustrated, with pictures of the headliners from the song.

The Telegraph has an interesting article about a Chinese village that appears to have descended from a lost legion.

Tests found that the DNA of some villagers in Liqian, on the fringes of the Gobi Desert in north-western China, was 56 per cent Caucasian in origin.

Many of the villagers have blue or green eyes, long noses and even fair hair, prompting speculation that they have European blood.
…
The genetic tests have leant weight to the theory that Roman legionaries settled in the area in the first century BC after fleeing a disastrous battle.

The clash took place in 53BC between an army led by Marcus Crassus, a Roman general, and a larger force of Parthians, from what is now Iran, bringing to an abrupt halt the Roman Empire’s eastwards expansion.

Blond haired, blue-eyed Chinese. That’s not a combination I would have thought of.

Noodles, cakes, porridge, and meat bones dating to around 2,500 years ago were recently unearthed at a Chinese cemetery, according to a paper that will appear in the Journal of Archaeological Science.

Since the cakes were cooked in an oven-like hearth, the findings suggest that the Chinese may have been among the world’s first bakers. Prior research determined the ancient Egyptians were also baking bread at around the same time, but this latest discovery indicates that individuals in northern China were skillful bakers who likely learned baking and other more complex cooking techniques much earlier.

“With the use of fire and grindstones, large amounts of cereals were consumed and transformed into staple foods,” lead author Yiwen Gong and his team wrote in the paper.

PhsyOrg.com says “The first outbreak of plague occurred in China more than 2,600 years ago before reaching Europe via Central Asia’s “Silk Road” trade route, according to a study of the disease’s DNA signature.”

Looking at Japanese art and seeing their representations of the West is particularly interesting to me. I haven’t done a wholesale study of it, but I think it would be fascinating.

So I was caught by Happy Catholic’s visual and discussion of an article in the Wall Street Journal.

So while artists in 1860s Paris were discovering the beauty of Japanese “floating world”â€”or ukiyo-eâ€”woodblock prints, many Japanese artists were heading to Yokohama, scouring European publications and creating their own genre of exotica: the Yokohama-e.

These prints are the focus of the Philadelphia Museum of Art’s “Picturing the West.” Drawn from the museum’s permanent collection, its 97 works express little of Japan’s mistrust of foreignersâ€”only excitement and curiosity. Typical of the genre, the prints are in turn amusing, beautiful, revealing and puzzling in their efforts to inform, entertain and sell. In the early rage for Yokohama-e, publishers churned out as many as 250,000 copies of about 500 designs. 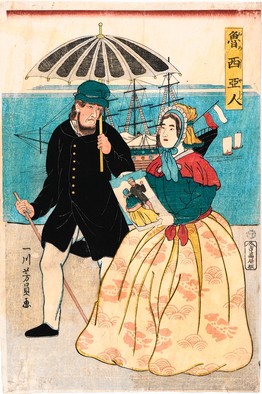 This is picture of a Russian couple from 1861.

The BBC has an article on the excavation of what was, in the 900s, the most magnificent city in the known world.

It has been 100 years since excavations started on the Madinat Al Zahra, the magnificent 10th century palace city near Cordoba in southern Spain.

Although only 11% of the city – built by the powerful caliph Abd Al Rahman III – has been uncovered, it is unlikely that it will take another century to unearth the remainder of the site given the rapid advances in excavation technology.

In a curious parallel, new techniques such a tele-imaging, that are being used in order to understand the 115-hectare site, reflect the revolutionary building techniques developed here a thousand years ago, and which came to define the distinct “Andalucian style”.

According to Discovery.com, the ancient Romans recycled glass.

The 21st century’s three Rs — Reduce, Reuse, Recycle — were all the rage in Britain during the last century of Roman rule, a compositional analysis of ancient Roman glass tableware has revealed.

According to the study, published in the Journal of Archaeological Science, large quantities of glass were recycled in Britain during the 3rd and 4th centuries A.D.

The reason wasnâ€™t exactly a desire to go green, but a shortage of raw glass in the northern regions of the Roman Empire during the last centuries of Roman rule.

Discovery News has some information about medical practices of 2000 years ago. It turns out that ships carried vegetable pills with them.

Advanced DNA analysis of 2,000-year-old tablets has revealed that vegetable pills may have been part of an ancient travel medical kit, according to a new study.

The kit was recovered from a shipwreck found some 200 meters (656 feet) from one of the most beautiful beaches in Tuscany. The wreck is estimated to date back to 140-120 B.C. and was partly excavated in the 1980s and 1990s by a team of the Archeological Superintendency of Tuscany.

Sin-eaters were generally poor people paid to eat bread and drink beer or wine over a corpse, in the belief they would take on the sins of the deceased.

Frowned upon by the church, the custom mainly died out in the 19th Century.

It was prevalent in the Marches, the land around the England-Wales border, and in north Wales, but was rarely carried out anywhere else.

Believers thought the sin-eater taking on the sins of a person who died suddenly without confessing their sins would allow the deceased’s soul to go to heaven in peace.

While most of the sin-eaters were poor people or beggars, Mr Munslow was a well-established farmer in the area.
…
Locals began the collection to restore the grave, which had fallen into disrepair in recent years, believing it would be good to highlight the custom and Mr Munslow’s place in religious history.

Too bad that didn’t work. Wonder how the poor felt. Were they just glad to have the money and food? Or were they concerned about the 1,000 years of purgatory they were adding? Did the vicar really turn a blind eye? Or were the unshriven allowed full rites?