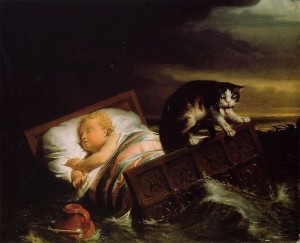 Lawrence Alma-Tadema painted this in the 1800s, after a true story from 1421 when a flood carried off a cat and a cradle. The cat jumped from side to side on the cradle to keep it upright.

I found the picture on Happy Catholic, who references the next site, Victorian Paintings, which said: “Depecting an incident from the great flood of the Zuyder Zee in 1421 where a cradle and a cat were swept away but the cat kept it upright by jumping from side to side.”

However, when I looked up “inundation of Biesboch” I found that Louis Bonaparte, King of Holland, wrote a fictional story about the inundation of Biesboch in 1815. Now apparently there were 16 villages in the Netherlands which were destroyed by a flood in 1421. Perhaps that is what the king was writing about.

Also, this article says that the flood was real and there was a cat and a cradle together in that flood, but the story of the cat jumping from side to side came from a 1589 newspaper story about that year’s flooding of the Hohenloe.

Since the picture was painted in 1856, it is quite likely that the two stories had been conflated through time. Or, perhaps, the cat jumped in both, but in the first we only have a picture and in the second we have the word witness.

Everett Millais’ “A Flood” was also about the same story. He and Alma-Tadema were friends. 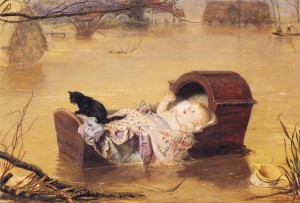